Understanding and predicting biodiversity in a changing world

The Zipkin Quantitative Ecology Lab at Michigan State University develops mathematical and statistical models and applies these models to critical problems in population and community ecology and conservation biology.

Discerning the effects of a rapidly changing world on biodiversity requires teasing apart many interacting processes and separating those from the noise found in imperfect, messy datasets. We tackle these challenges with data science methods to generate new analytical frameworks, integrating data from multiple sources, and capitalizing on the vast emerging networks of big data, answering fundamental questions from local to regional and even continental scales.

Visit our lab's Github code archive to see our progress 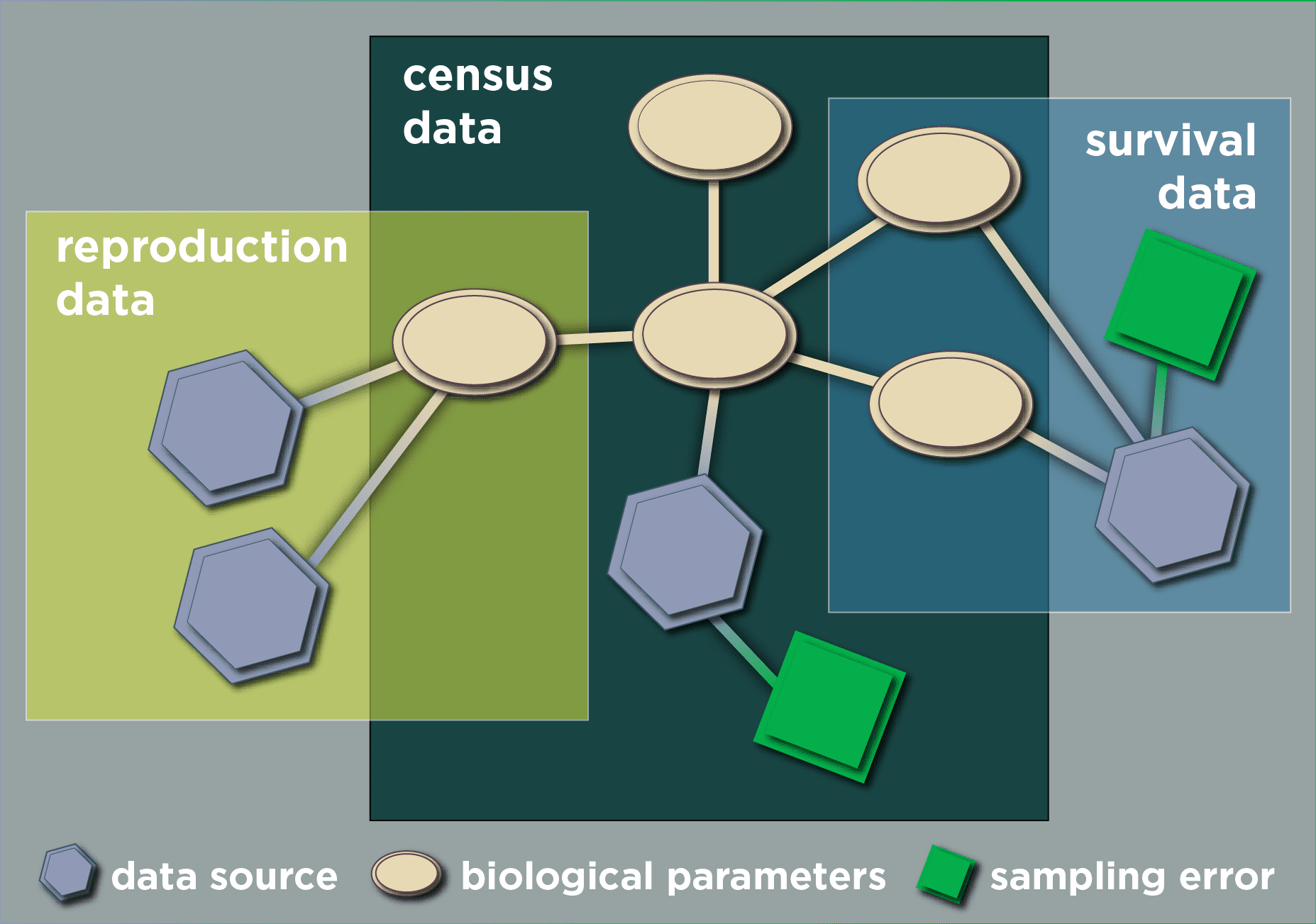 Why do population distribution and abundance patterns change through time and space? We combine multiple available data sources to study how species vary across their ranges.

Characterizing population dynamics is challenging because data are limited for many species, particularly those with small or declining populations or those that span large spatial scopes, including migratory species. Our lab develops data integration models, which combine multiple data sources and types into a unified analysis. We use these models to study the processes that shape species distributions and abundances across space and time.

This approach allows us to evaluate ecological dynamics using a holistic perspective, which we use to assess the effects of environmental and climate variables on species trajectories and to make forecasts as to how species may respond to future conditions.

Our work in this area has led to advances in estimating the demographic parameters driving declines of imperiled species, discerning the effects of management on species abundance patterns, and creating guidelines for use in conservation. We’ve developed approaches to incorporate novel data types, reconcile discrepancies in multiple data sources, and evaluate multiscale effects of environmental and climate variables on species’ dynamics.

In Zylstra et al. (2021), we examined the seasonal factors driving the size of the eastern monarch population from 2004–2018 by integrating thousands of surveys from six monitoring programs spanning Mexico, the U.S., and Canada. The figure shows the (a) timing and (b, c) locations of the four monarch butterfly generations (G1–G4) produced within the annual migratory cycle and (d, e) the relative importance of factors affecting monarch population sizes in summer and early winter as estimated in our model. Breeding-season weather was nearly seven times more important than other factors in explaining variation in summer population sizes, which subsequently explained the most variation in overwintering population sizes. 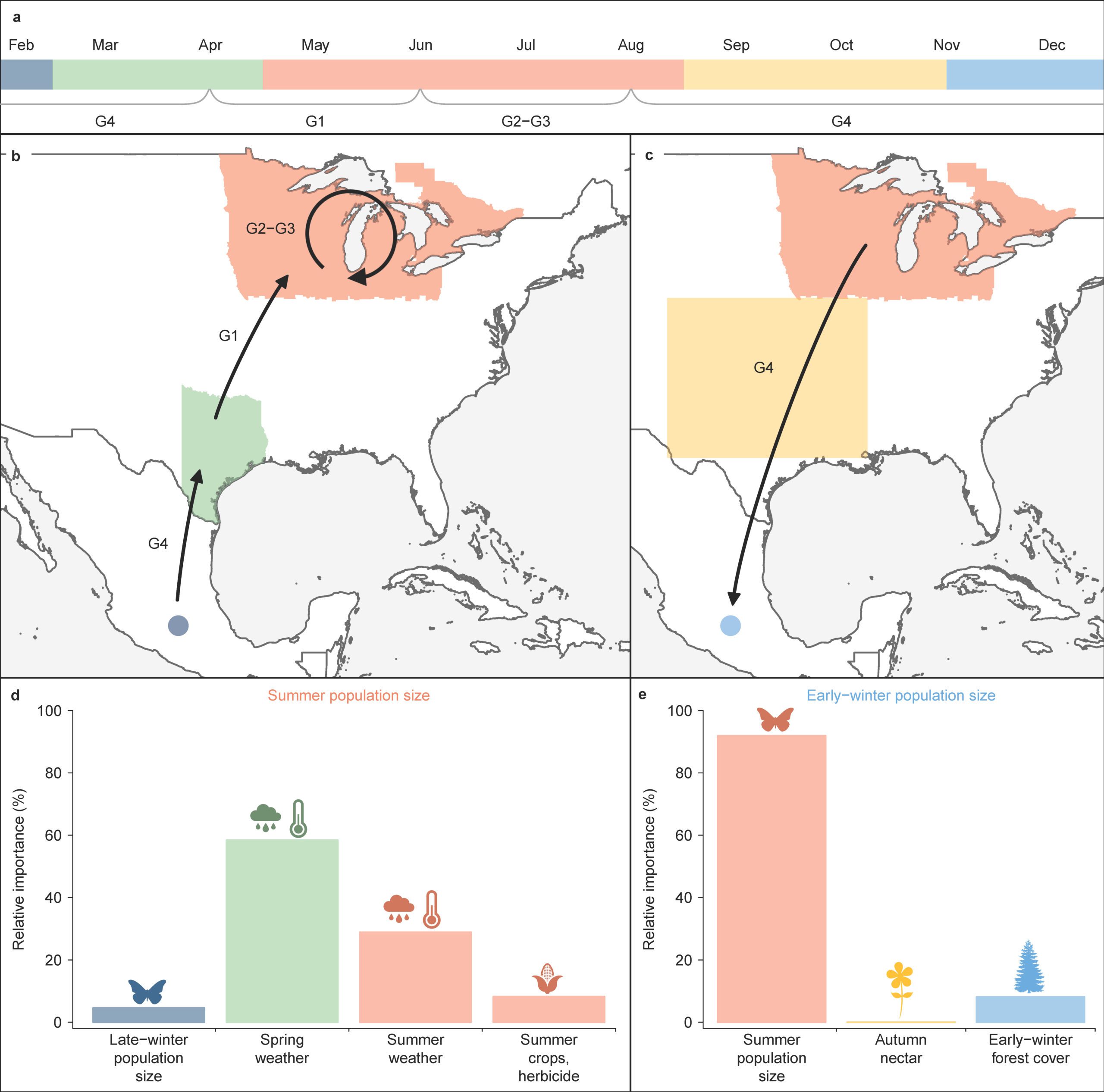 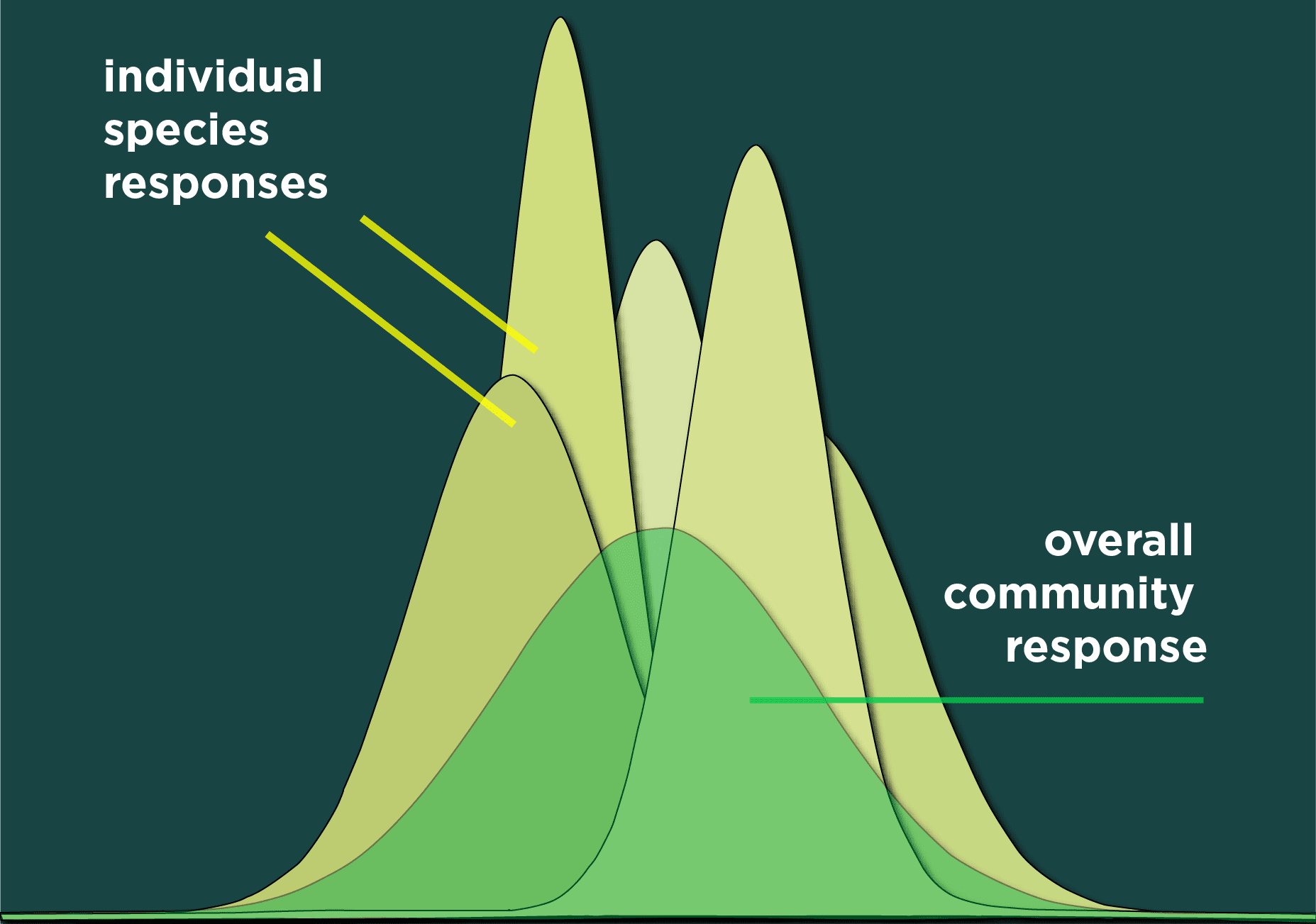 How does biodiversity respond to environmental and climate change? We examine both individual species responses as well as the composite responses of community groups.

Understanding how and why biodiversity changes necessitates assessments of the status, trends, and dynamics of entire ecological communities, not just those species that are common or charismatic. Our lab uses a hierarchical statistical framework to develop community models that can simultaneously evaluate groups of species.

This framework links individual species models, sharing information across species to produce estimates of both species- and community-level processes while accounting for important variations in the biology and detectability of species. We use these models to evaluate how environmental, climate, and management factors affect all species within a community, including those that are rare and elusive.

Our work in this area has shed light on differences in the ecological responses of taxonomically similar species to habitat conditions and weather variables as well as the effects of anthropogenic activities. We have also used these models to determine the optimal approaches to monitor and conserve biodiversity within and across networks of protected areas.

A key contribution of this modeling framework is the ability to provide inferences on rare and elusive species, not just those species that produce enough data for typical species-by-species analysis approaches.  Using community models, we have evaluated the cascading consequences of amphibian losses on a data deficient snake community as well as predicted the effects of conservation management activities and future climate conditions on birds, amphibians, and mammals.

In Cabodevilla et al. (2022), we developed a hierarchical community model to examine the effects of implementing irrigation within agricultural areas on the occurrence patterns of local birds. Using a BACI (Before-After Control-Impact) design, we estimated the occurrence probabilities of 47 species within rainfed farms in the Mediterranean region of northern Spain. The figure shows the change in species’ occurrence probabilities after irrigation. The occurrence rates of most species (55%) decreased after irrigation was implemented at a site (shown in red and orange) and only a small fraction (11%) increased after the onset of irrigation (blue; grey indicates no change in occurrence), leading to an overall reduction in site-level species richness. These results demonstrate that even similar species can have important biological variations. 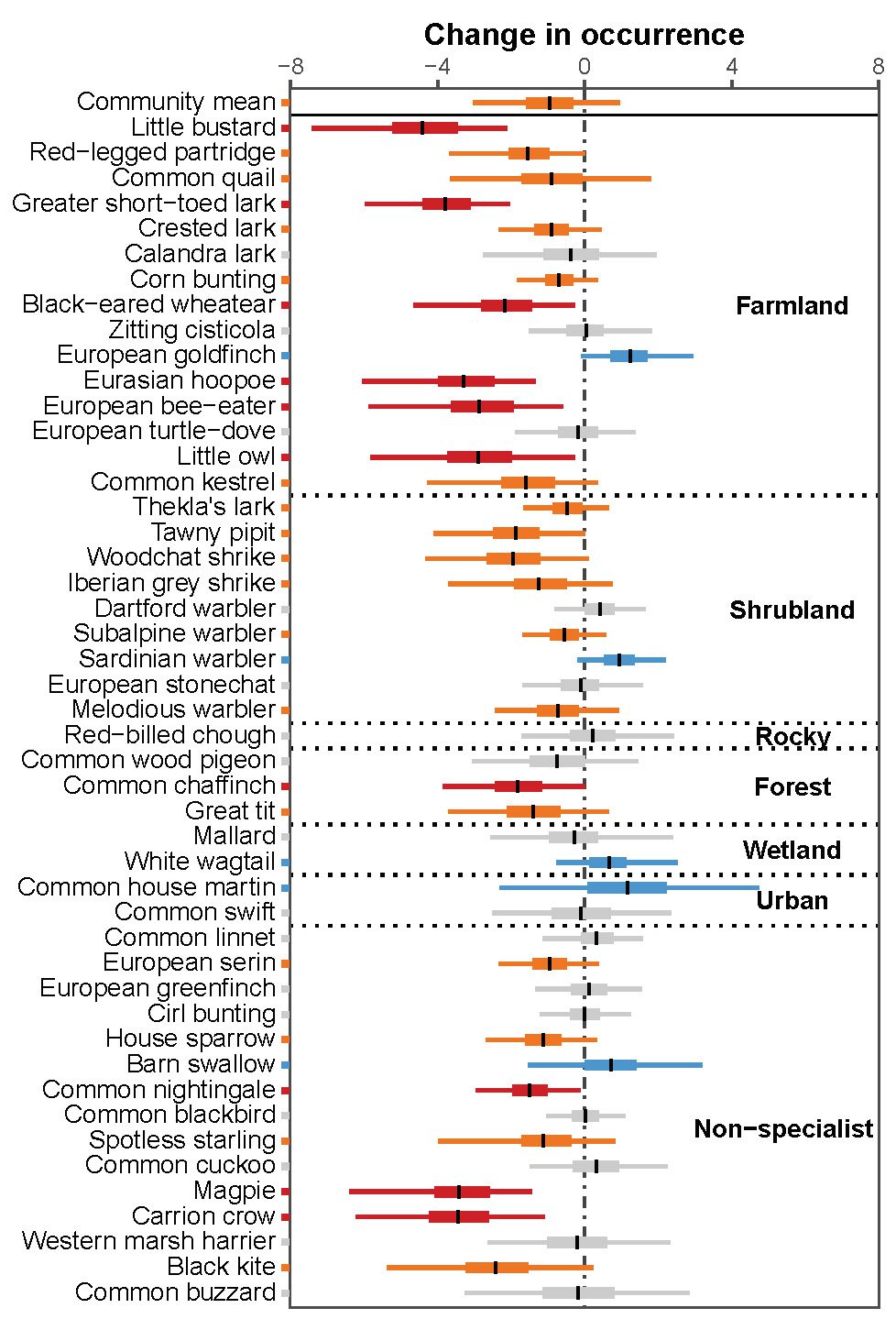 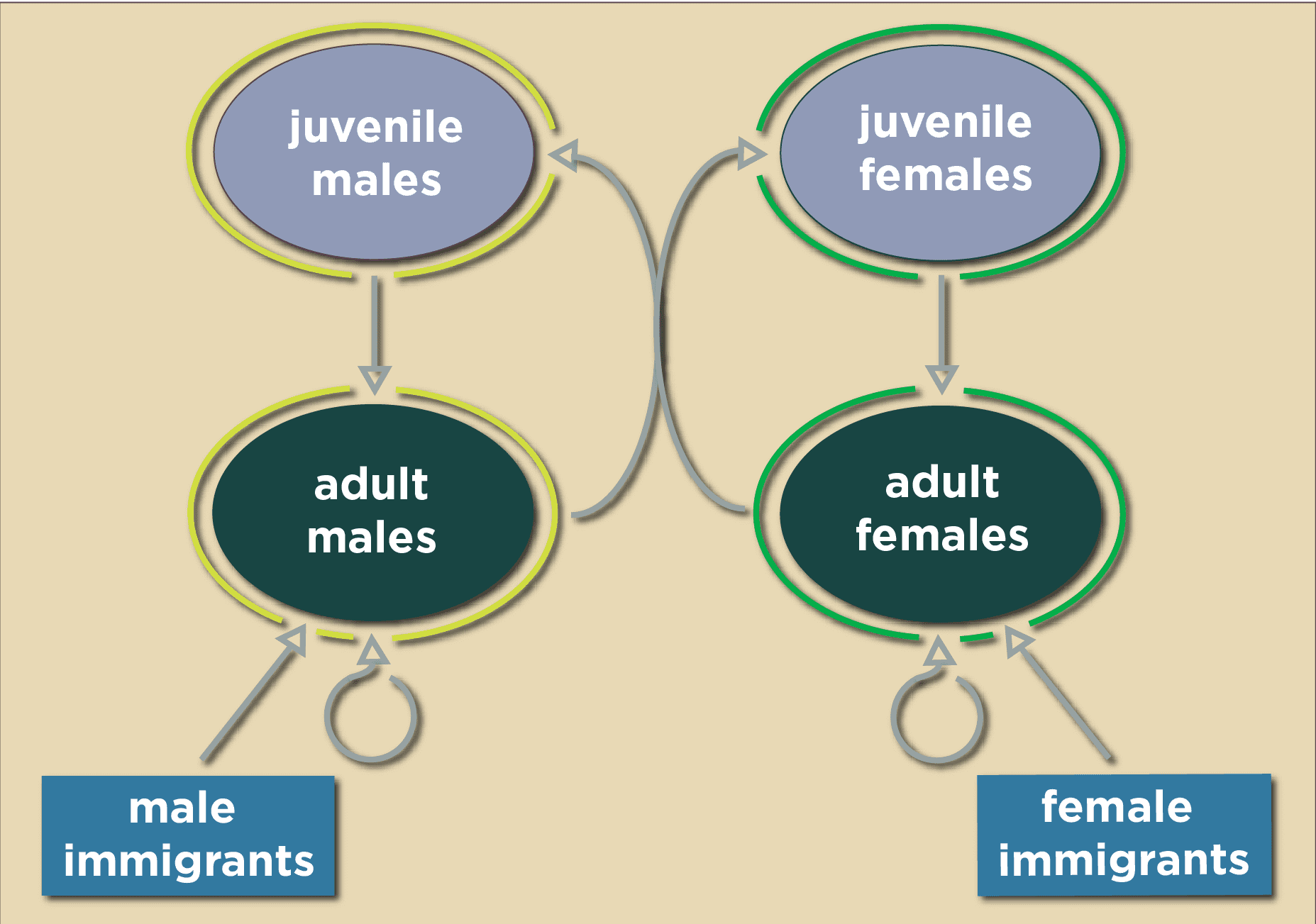 What factors influence a species trajectory – whether it will decline or rebound? We develop models to estimate species biological parameters from the most widely available data.

The development of unmarked data models is profoundly important to evaluating biodiversity changes because these information-poor data are the only records available for the vast majority of species worldwide. Using our open-source code, scientists and conservation practitioners can apply our methods to jeopardized systems around the globe.

Our work in this area has produced estimates of key demographic parameters including stage-specific fecundity, immigration, and survival only using count data and/or detection-nondetection data. We use these models to evaluate life history processes and population trajectories for both threatened and invasive species and have also extended the framework to incorporate coupled population host-disease dynamics.

In Rossman et al. (2016), we used 26 years of detection-nondetection data to estimate abundances of barred owls within a recently invaded region in Oregon, USA. Barred owl expansion is of intense conservation interest because barred owls often force threatened northern spotted owls from their territories, contributing to their continued decline. The figure shows estimates of barred owl: (a) detection probabilities; (b) survival relative to the amount of forest habitat; (c) recruitment/immigration relative to abundance in the previous year; (d) annual abundance over the study period; (e) colonization (blue) and extinction (orange) probabilities; and (f) spatially-explicit abundance within the study area (red star in inset) for three different years during the study. 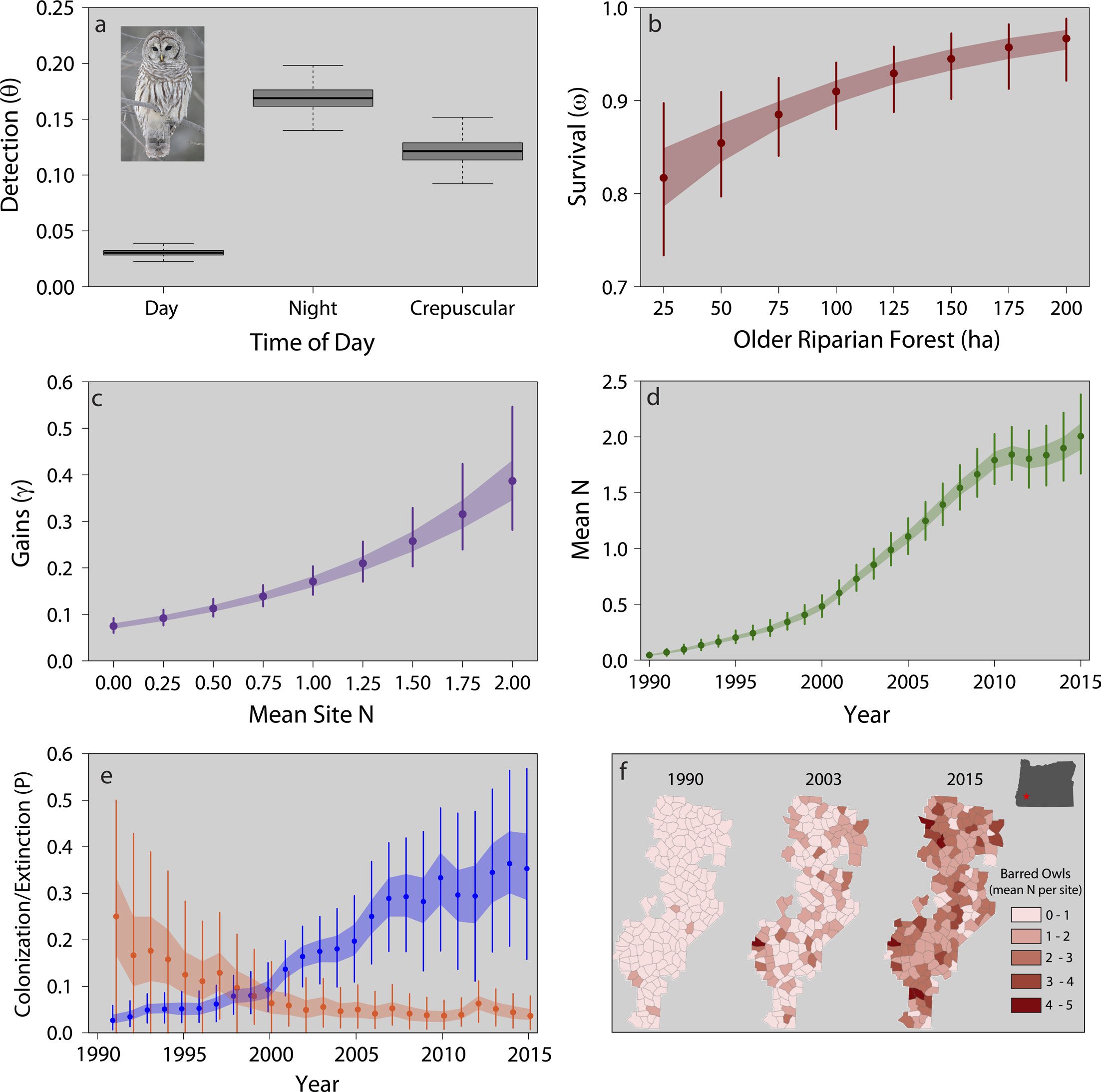 Other Things We Do

We work on many other types of projects broadly falling under the umbrella of mathematical and statistical ecology. Check out our publications to learn more about our work and the news page to find out about our collaborations.